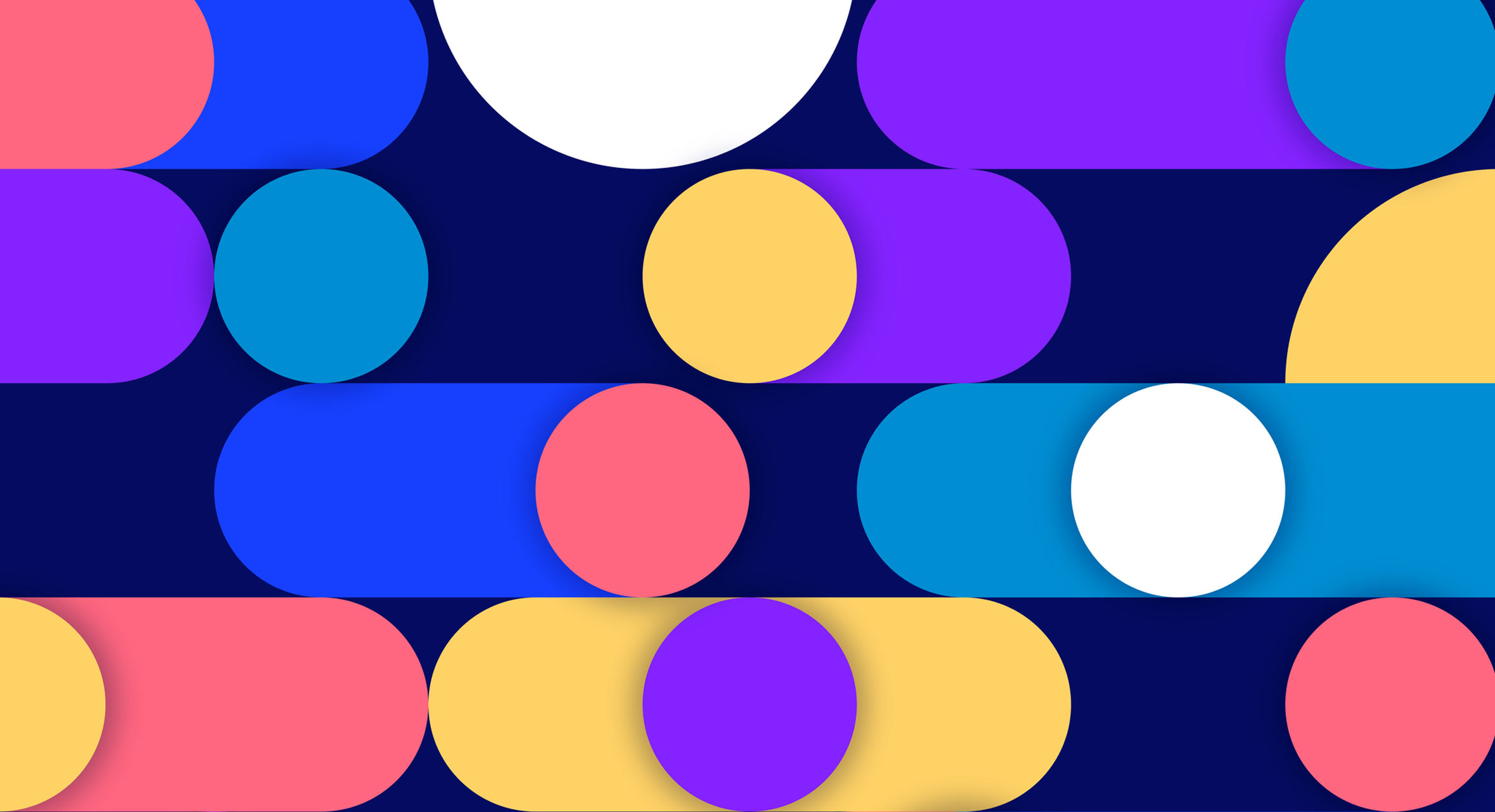 We have a new Prime Minister.

And like most new leaders, he’s inherited a problem.

Well, two problems, but let’s save economic meltdown for another day.

The other big strategic problem for Rishi Sunak is that the Conservative Party isn’t sure who it is anymore or to whom it is meant to be appealing.

Since the Brexit referendum, the Conservative Party has made a giant leap towards a particular part of the population (low security, low diversity) that it had been heading slowly for since the 1980s. 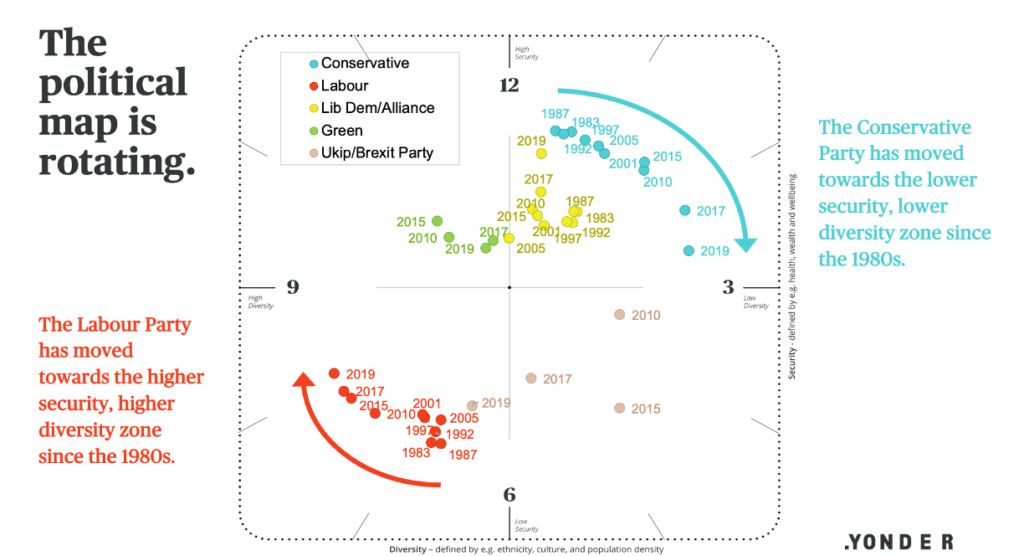 Yonder Clockface is an analytical model that demonstrates how the political map is rotating (as shown in the chart above). The model distributes the population on the face of a clock, using a combination of factors that together form two predictive super-traits: ‘security’ and ‘diversity’. Using the model, we then plot real-world outcomes or opinions on that clock – like the way people voted at every election since the 1980s.

Why is this rotating map a problem for Rishi Sunak? Because it means that the Conservative Party – in the sense of both its voters and its MPs – is now an uneasy mix of the old and the new, of people from different walks of life with different values and outlooks.

In some ways this is a natural corollary of electoral success. All voter coalitions in first-past-the-post systems contain the seeds of their own downfall. It takes a special kind of leader to successfully hold a disparate coalition of people together over any considerable period of time, but at some point, the stresses and tensions inherent in those coalitions become too great to sustain.

To avert the inevitable for as long as possible and keep the band together, Sunak will need to consider where he sits in the coalition of people he now leads and in which directions he should cast his net.

To whom does Rishi Sunak appeal, and why?

All of this is best understood using Yonder Clockface.

The first thing the model shows us about Sunak’s premiership is that he starts from a place that is different from Johnson and Truss. 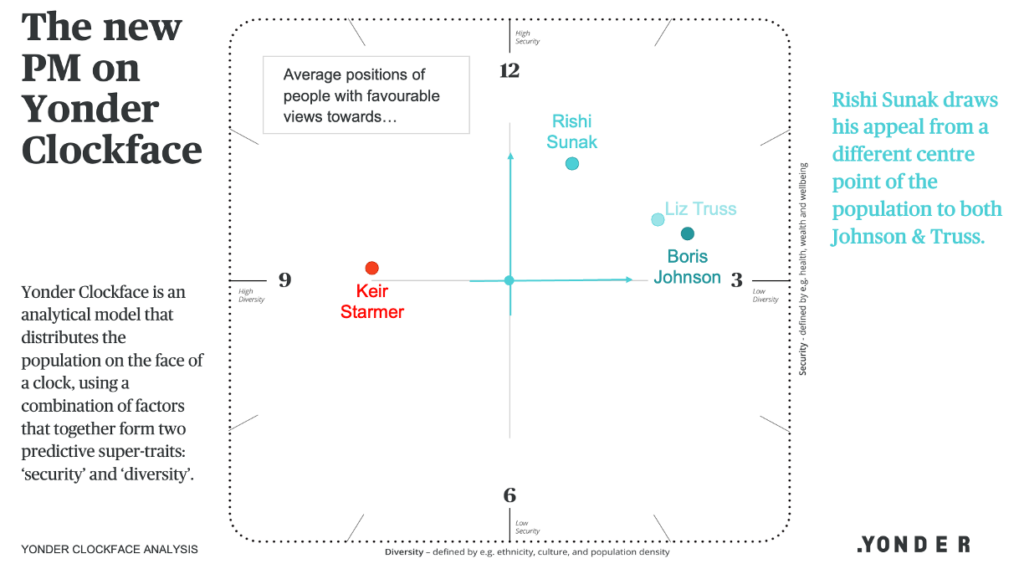 Why is that? Partly, it comes down to ‘vibes’.

Janan Ganesh wrote about this recently in the Financial Times, making the case that while “policies matter, of course”, so do “tribal signifiers”.

The ‘vibes’ theorists say that what you actually do doesn’t matter all that much in determining how you are perceived – rather, it’s about the ‘vibes’ you manage to project.

Liz Truss was the prime example of the vibes theory at work: a former Liberal Democrat, pro-immigration Remainer who pulled off the feat of winning the support of arch Brexiteers because of what she represented to them.

If the vibes you give off don’t accord with your target audience, you have to work much harder to make the right impression.

As Ganesh says, it’s about feeling that “these are my people. They dress and act like the average of my 10 best friends.”

Yonder Clockface shows this in action: that politics, leadership, and brands are indeed about ‘vibes’. Or in other words, the values and qualities that different people want to see reflected in their leaders and out there in the world.

If you analyse polling data, psychological survey data, or focus groups through the model, you find that the mix of qualities and values that people favour differs across the clockface. The things that people want and seek out can be traced back to these underlying preferences.

Individuals located in the bottom right – 3-6 o’clock – for example, are more likely than others to be positively disposed towards people who project strength, nationalistic pride, and loyalty. That is one reason why Boris Johnson connected with this part of the clockface. He represented values that appealed to them, he understood them, and he seemed to like them. (People in the 3-6 o’clock zone also value honesty highly, so it’s no coincidence that they later deserted him in droves).

What about people in the top right – 12-3 o’clock? They are more likely than others to value competence, intelligence, and stability. Rishi Sunak is therefore very well-placed to appeal to these people.

But this is where his problem lies. Because of the situation he has inherited, Sunak can’t really afford to appeal to those people and only them. Since 2019, there are many more MPs in Sunak’s own party who come from communities in that 3-6 o’clock zone, and they tended to support Johnson and Truss over other Conservative leadership candidates. Sunak has those MPs to please and a manifesto to deliver, and it was written with those 3-6 o’clock voters in mind.

So, if he wants to keep his own MPs happy and retain the coalition he has inherited, he will need to make a special effort to appeal to those in the 3-6 o’clock zone, who aren’t as naturally predisposed to the traits he embodies, while also keeping onside the 12-3 o’clock zone, who are.

He can try to do that through policy decisions, like appointing Suella Braverman as Home Secretary and committing to reducing net migration. But there’s no getting away from the importance of the ‘vibes’ that he and his government project, and those are harder to control.

His best bet is to serve up a combination of policy and values with something for everyone on the right-hand side of the clock: exhibit supreme economic competence and restore stability, project strength and national pride, and find new ways of expressing fidelity to the less economically secure who voted Conservative for the first time in 2019 and who aren’t yet feeling the benefits of ‘levelling up’. That won’t be easy, and at some point, one of those groups is likely to feel hard done-by.

To win people over, the right decisions and policies aren’t always enough. If you want to predict how long Sunak’s premiership will survive, don’t just look at the policies and their outcomes, important as they are. Think about a broader point: is he successfully embodying enough of the fundamental traits and values that appeal to all those different target hours on the clock?

The task at hand for Rishi Sunak is not dissimilar to those that business leaders face. Only with a real understanding of what is important to them and why can you connect with them in a more meaningful way to drive growth. If you’d like to understand where your audience sits on the clockface, and what motivates their attitudes and behaviours, we’d love to show you with Yonder Clockface.

Confidently predict how audiences will respond to your business initiatives.

Put it to the test